What are the reasons why home elevators are MRL elevators

What are the reasons why home elevators are MRL elevators

The traditional elevator machine room mainly refers to the placement of the elevator's traction machine, speed limiter, control cabinet and other components in the machine room. MRL elevators are relative to MR elevators, that is to say, the equipment in the machine room is miniaturized as much as possible while maintaining the original performance by using modern production technology, eliminating the need for the machine room, and replacing the control cabinet and traction equipment in the original machine room. The machine, speed limiter, etc. are moved to the top of the elevator hoistway or the side of the hoistway, thereby eliminating the traditional machine room and greatly reducing the construction cost. At the same time, the emergence of MRL elevators is also the result of the innovation of elevator traction machines. Currently, the most popular traction mainframe is a permanent magnet synchronous gearless mainframe. Compared with the traditional mainframe that uses a gearbox to change speed, this kind of mainframe eliminates the traditional gear meshing. The noise of the main engine is smaller and the weight is lighter, which has lower requirements for the strength of the hoistway and installation. 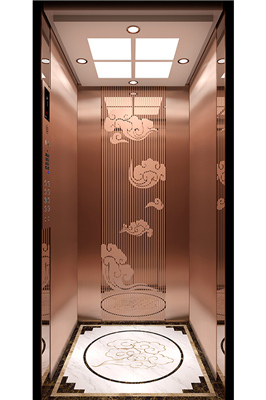 In the home elevator, affected by the structure of the villa building, the elevator needs to be designed according to the actual situation of each villa. Generally, the floor height of villas is not too high, and the size of the elevator is relatively small. At the same time, for some sites with special requirements, the elevator needs to be optimized differently. As a special-shaped customized product, home elevators must be lower than passenger elevators in public places in terms of speed, size, and load. Normally, the top floor can be designed and installed when the height of the top floor is above 2600mm. For example, some taller lofts can reach the first floor of the loft as long as the size allows the elevator to reach the loft without sacrificing the loft as an elevator machine room. The structure of home elevators can be reasonably designed based on the site installation position. For example, the width of the installation position is obviously greater than the depth. Most elevators are designed according to the counterweight on the machine-room-less side.

For newly built villas, because there is no need for a computer room, it has greater benefits to the building structure and cost, which allows architects to have greater flexibility and convenience in design, and gives designers greater freedom. Canceling the machine room, for the owner, MRL elevators are lower than the construction cost with MR elevators.

For the built villas, many sites are not allowed to destroy the overall style of the building, and the elevator problem must be solved within an effective height. Therefore, MRL elevators can meet the needs of such buildings. At the same time, MRL elevators have relatively low requirements for site conditions and the overall structure The changes are relatively small and the construction is simple, which is also very beneficial to the decorators.

The features of MRL elevators are as follows:1. The main engine, drive cabinet and control cabinet of MRL elevators are installed on the upper part of the hoistway, and no special machine room is required. Compared with traditional elevators, it has great advantages in appearance.